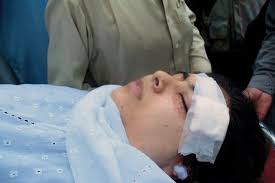 Institut de recherche et d’études stratégiques de Khyber (IRESK),  a partner of International Alliance against Terrorism (IAAT) express its deep concern and condemn the monster attack of Taliban on Malala Yousafzai. She got world wide popularity when she publicized the atrocities of Taliban in the picturesque valley of Swat through her blog with her pseudoname Gul Makai on BBC urdu Service. The National Peace Award winner, 14 years old Malala Yousafzai, daughter of Zia-u-din Yousafzai was born in 1998, who came under the global spotlight for her activities as Human Rights and Child education Activist was shot twice by a Taliban gunman today. Malala was injured along with two other girls. Her only crime was that she wanted to go to school and demanded publically the same for other girls in Pakistan. She was a rare ray of hope for the girls of Pakistan.The gunman while boarding the bus taking the children home from school demanded which one  of the girls was Malala before shooting twice in her head and neck. She was a clear target and the terrorists succeeded in their heinous desire to silence a voice of peace and enlightenment.  Ironically, this small child who was promoting education was accused by Taliban for propaganda against Islam to justify their brutal act.

The Taliban statement calling her work as OBSCENITY, is really shocking. It was the responsibility of the government of Pakistan to protect her but badly failed in fulfilling its duties to protect her from the terrorists. We request the USA, EU, UK and UN to take notice of this brutality and declare the TERRORISM ON CHILDREN as one of the grave child rights violations.