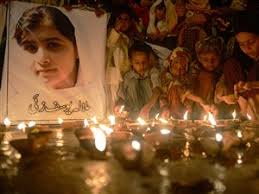 Pakistan is increasingly becoming a dangerous place for our children to live. A leading child advocacy NGO in Pakistan, the Society for the Protection of the Rights of the Child, in a recently released report, presents a very bleak picture. According to this report more than a third of the nation’s population age 5 to 9 — about 7 million children — is not enrolled in school. 7,000 child abductions reported in 2011 — 3,090 of which occurred in the southern city of Karachi. Only 49 percent of children have completed primary education in Pakistan (59 percent of boys and 39 percent of girls). While 67 percent of children in urban areas have completed primary education, only 40 percent of children in rural areas have done the same.

According to this report named, The State of Pakistan’s  Children-2011, around 600,000 children in Khyber Pakhtunkhwa have missed one or more years of education due to militancy. Almost 25 million children are currently out of school in the country and of them, seven million had yet to receive any form of primary schooling.

4955 persons including innocent civilians, children and women have been killed in terrorist related violence in Pakistan this year till September.

The month of September was marred by violence and terrorism. More than 12 children have been killed and 14 injured in different terrorist incidents. Nearly 11 schools were destroyed in the North West Khyber Pakhtunkhwa Province.

Date-wise analysis of the terrorist attacks on children, educational and health personnel  killed and injured in the month of August is as under:

A handcuffed 14-days-old decomposed unidentified dead body of a boy was recovered from Lyari Naddi within the jurisdiction of Pak Colony Police Station.

An unidentified boy (12) was injured in a land mine explosion in Turbat District.

Three children playing cricket in Safi tehsil of Mohmand Agency were injured when an improvised explosive device exploded. The target was obviously children, because the IED was planted in a playground.

a)      Three persons, including a minor girl, were killed when a mortar shell fell on the house of one Kaptan Khan, a resident of Kandawo village in Sipah area of Khyber Agency in FATA. Shah Nawaz, Gul Nawaz and a minor daughter of Ahmad Gul were killed on the spot in the incident.

b)      A Government schoolteacher belonging to the Ahmadi community, identified as Abdul Ghaffar (35), was shot dead in Gulistan Colony within the limits of Chakiwara Police Station.

At least 13 workers of a factory, including two women workers, were injured in a remote-controlled bomb attack on a bus in the industrial town of Hub in Quetta.

A teacher of a girls’ school went missing when she was coming to Mohmand Agency from Attock District of Punjab. Officials said that the teacher, Robina Tabassum, went missing near Shabqadar area when she was on her way to the school.

A blast that took place outside a scrap shop left a 10-year-old boy dead and 10 others injured at Bara Board in Nazimabad under Pak Colony Police Station in Karachi, the provincial capital of Sindh.

Fifteen people, including two children, three women were killed and 12 others sustained injuries when a passenger vehicle hit an improvised explosive device (IED) in the Landay Shah area in Lower Dir district on Sunday, officials and eyewitnesses said.

a)      In Haidry Market of Karachi one girl child was killed and several others including 7 women were killed and  22 injured in series of three explosions.

At least seven people belonging to the Dawoodi Bohra community, including a three-month-old baby Shabbir, a 12-year-old girl Umema and a woman, were killed and 22 others injured in twin bomb blasts on a road between two apartment buildings — Qasr-e-Kutbuddin and Burhani Bagh — in Block C of North Nazimabad, commonly called Bohra Compound.

A powerful car bomb targeting a vehicle of the PAF near Scheme Chowk on Kohat Road in Peshawar killed 10 people and wounded 34 others, including women and children. No group claimed responsibility for the attack.

A 10-year old girl was killed in firing by the police in the limits of Shergarh Police Station on Sunday, local sources said. The sources said that Niamat Ali was heading to his home in his car from Sakhakot when the police signalled him to stop at Shago Naqa checkpost at 8:30pm. The police fired at the car leaving his daughter Marwa dead on the spot.

A child was injured when a ‘toy bomb’ exploded in the village Shah Alam, located six kilometers east of Tank, on Sunday, said a military official here on Monday.

Two students were killed and seven others including a pro-government tribal elder sustained injuries in a roadside blast in Ferozkhel area in Orakzai Agency on Thursday, tribal sources said. They said the explosive device went off at 11am when Malik Muhammad Sharif along with his son, Abdul Sharif, was passing through the bazaar.
As a result, two students, Abidullah and Muhammad Shafiq, of class 8 in the Government High School, Jhlaka Mela, were killed on the spot while seven others sustained injuries, the sources added. The injured included tribal elder Malik Muhammad Sharif, his son Abdul Sharif, Mian Gul, Ebad Gul, Wasim Khan, Habibullah and Abu Bakr.

According to Information received and verified by IRSK, nearly 11 schools were destroyed or damaged by bombings in Khyber Pakhtunkhwa.

Date-wise analysis of terrorist attacks on schools in Khyber Pakhtunkhwa Province is as under:

a)      Unidentified militants blew up a Government girls’ primary school in Shewa area of Swabi District in Khyber Pakhtunkhwa. The blast partially damaged the school building, but no causality or injury was reported.

b)      Unidentified militants blew up a Government Girls’ Primary School in Khazeena area of Safi tehsil in Mohmand Agency of FATA.

a)      Unidentified militants blew up a Government-run primary school in the Badbher area in Peshawar. The blast flattened two rooms, but no loss of life was reported.

b)      Militants blew up Government Primary School Haji Malik Nadir in the Parata Qilla area of Haleemzai tehsil in Mohmand Agency of FATA increasing the total number of schools destroyed in the agency to 103.

Unidentified militants bombed a Government-run primary school in the Akkakhel area of Khyber Agency in FATA.

Unidentified militants blew up a Government girls’ high school in Lond Khor area near Shah Dhund in Mardan District of Khyber Pakhtunkhwa. No loss of life was reported.

A government school was partially damaged in a bomb explosion in Babozai village in Katlang area of Mardan district on Monday, sources said.The sources said explosives planted by militants in the building of Government Boys Middle School in Babozai went off early in the day.

Unidentified militants blew up a Government middle school for boys with an explosive device in Saro Killay area of Shabqadar tehsil in Charsadda District of Khyber Pakhtunkhwa.

Militants destroyed a state-run school in Shabqadar tehsil in Charsadda district. The sources said the Government Girls Primary School in Samanat village was blown up with explosives at midnight. The school was destroyed in the explosion.T he militants had destroyed the same school a year ago.

The United Nations Working Group on Enforced or Involuntary Disappearances has rounded up its ten-day visit to Pakistan. The group clearly pointed out  the involvement of Military Secret Service in the disappearances and called on the government to try the responsible personnel in the ordinary courts. The Chairman of the Working Group, Olivier de Frouville noted that some 500 disappearances were on the group’s radar. Based on their findings, Frouville and group member Osman El-Hajj, will submit a detailed report to the UN Human Rights Council in 2013.

Religious and sectarian intolerance is on rise. Widespread and systematic attacks on Christians, forced conversersion of Hindus to Islam, the relentless killing of Shia community, persecution of Ahmedis and the use of Anti-blasphemy laws against the religious minorities indicates a dangerous and frightening trend in Pakistan. Even the children are not spared in this wild religious vigilante-mob-justice. The implication of a small  14 year old child, Rimsha Masih in Blashphemy is a clear evidence of blind and mindless pursuit for persecuting minorities in the name of religion in Pakistan.

The burning of a Church, its adjacent school and a house of Pastor by a mob of 7000  Muslims in the North-Western city of Mardan is testament to the fact that the minorities are not secured and protected in Pakistan. That is why Hindus and Christians are migrating in hordes from Pakistan to other countries.

The international community must take notice of these gross human rights violations of children, religious minorities and different ethnic groups in Pakistan. All diplomatic, financial and economic means should be used to pressure Pakistan to protect these victimized groups and take legal and administrative measures to prevent the religious fanatics from killing children and minorities in the name of religion.

Filed under De-Pashtunisation of Pashtuns by Pakistan