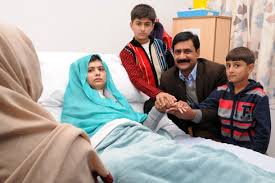 Institut de recherche et d’études stratégiques de Khyber (IRESK),  a partner of International Alliance against Terrorism (IAAT) express its deep concern and condemn the monster attack of Taliban on Malala Yousafzai. She got world wide popularity when she publicized the atrocities of Taliban in the picturesque valley of Swat through her blog on BBC urdu Service. The National Peace Award winner, 14 years old Malala Yousafzai, who came under the global spotlight for her activities as Human Rights and Child education Activist was shot twice by a Taliban gunman. Malala was injured along with two other girls Kainat and Shazia. The gunman while boarding the bus taking the children home from school demanded which one of the girls was Malala before shooting twice in her head and neck. She was a clear target and the terrorists succeeded in their heinous desire to silence a voice of peace and enlightenment. The Taliban statement calling her work as OBSCENITY, is really shocking. It was the responsibility of the government of Pakistan to protect her but badly failed. We request the USA, EU, UK and UN to take notice of this brutality and declare the TERRORISM ON CHILDREN as one of the grave child rights violations.

The month of October can be termed the worst in the history of Pakistan as a courageous child right activist Malala Yousafzai was injured in a brutal attack on October 9, 2012, by Taliban to punish her for her contributions for the rights of the children of Pakistan particularly their right to education. At least 13 children were killed and 42 were injured in several terrorist attacks in Khyber Pakhtunkhwa and the Tribal Region of Pakistan known as FATA.

a)      Unidentified militants (terrorists) killed a FC official and a child in separate incidents in Peshawar, the provincial capital of Khyber Pakhtunkhwa.

b)      Unidentified assailants (terrorists) opened fire in the suburban area of Badhaber, killing one child.

A child was killed and another 13  people were injured in a blast in Quetta.

Two children were killed and one was seriously injured in a hand grenade blast in College Town area of Kohat in the same District of Khyber Pakhtunkhwa.

Malala Yousafzai was injured along with two other girls Shazia and Kainat in a brutal attack by Taliban.

a)      KALAYA: Four persons, including two women, were killed when a mortar shell hit a house in Mamozai area in Orakzai Agency, tribal sources said. The sources said that the shell hit the house of Sultan Mir in Mir Kadamkhel village in the Taliban-controlled Mamozai area at 10am. Zarif Khan and Khan Muhammad and two women were killed on the spot, they said, adding, Sultan Mir and a child sustained injuries in the attack.

b)      Two children were injured when a mortar shell hit a home in the Akkakhel area of Bara tehsil in Khyber Agency of FATA.

A 13-year-old boy, Usman, was seriously injured when explosive device went off in Hilalkhel area of Charming in Bajaur Agency of FATA.

A girl, identified as Hisha Bibi (14), suffered injuries in a rocket attack from across the border on Mina, Sapary and Bandagi villages of Mamond tehsil in Bajaur Agency.

Quetta:  3 FC men were killed and 11 including women and children were injured in a blast in Saryab road area of Quetta.

a)    One girl Aisha was killed  and another was injured along with a male child in a bomb explosion in Kermival Kalay in Hangu District of Khyber Pakhtunkhwa province.

b)    A child was killed and three others were injured when a mortar shell, fired from an unknown location, landed on a house in Sanzal Khel area of Bara tehsil.

In Charbagh Telhsil of Swat, the house of Sardar Mohammed a leader of peace Militia was attacked by Taliban in which Sardar was killed his 5 years old son was injured.

In the month of October, at least 9 schools were bombed and destroyed in several terrorist attacks in Khyber Pakhtunkhwa and the Tribal Region of Pakistan known as FATA.

Unidentified militants blew up a Government Primary School Kamal Khel in Qandaro of Safi tehsil in Mohmand Agency, increasing the number of destroyed schools in the agency so far to 104.

The Khyber Pakhtunkhwa Government has reconstructed 30 health facilities in Swat District damaged in militancy.(Which means these 30 hospitals were destroyed by terrorists, which was not reported in media)

Unidentified militants blew up the building of Government high school in Adamzai village of Akora Khattak area in Nowshera District of Khyber Pakhtunkhwa.

a)      Unidentified militants blew up a Government-run school in the Malka Dher area of Charsadda District.

b)      A Government primary school was blown up by unidentified militants at Usmanabad area of Akora Khattak in Nowshera District.

CHARSADDA: The militants on Tuesday blew up a state-run school in Malkadhera in the limits of the City Police Station, official sources said. The sources said the explosive devices planted in the Government Primary School in Malkadhera went off early in the day. Two rooms were destroyed while another room and boundary wall were partially damaged.

A community health centre was partially damaged in a blast in Bar Taras area of Salarzai tehsil.

A Government-run primary school for girls was blown up in two bomb blasts in the Kalay Marhati area of Nowshera District in Khyber Pakhtunkhwa.

a)      GHALLANAI: The militants blew up two government boys primary schools in Tehsil Haleemzai of Mohmand Agency Wednesday after which the total number of the schools destroyed by the militants stand at 106, Geo News reported.According to official sources, explosives were planted at Government Boys Primary School, Malik Orangzaib and Malik Dilawa

b)      Suspected militants blew up a Government middle school in New Nehar Jahangira area in Swabi District of Khyber Pakhtunkhwa.

Mardan: extremists blew up girls school in Katti Garhi area of Katlang, Mardan. Several rooms of the school were destroyed in the blast while watchman sustained injuries in the incident.

Well aware of the power of education for empowering women and girls in the economic, social and political areas of life, the Taliban and other terrorist organizations operating in Pakistan using all brutal means to stop girls from going to school. Taliban along with the feudal lords and Military establishment do not approve the education of girls so that they can marginalize, isolate, discriminate, violate their basic rights, make women economically dependent on men and stoop them to a lower status in this male-dominated society.